aka “The Rehabilitation of an Old Stanley Plane”

I love to make wooden planes, but metal planes have a place in my toolbox, too. Like many hand tool freaks I have an attraction to the Lie-Nielsen planes — improved versions of many of the old Stanleys — but not often the wherewithal to buy them. I prefer older Stanley planes for the same reason I prefer older machinery — the castings are better, the tools overall are more well-made (imho). And, I’m a skinflint who would most often rather buy an old junker and fix it up than get something new. 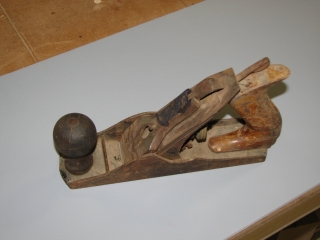 I was recently at an ‘estate sale’ that had a lot of tools for sale. There were a number of nice old Stanleys in apparently good, usable condition, not cheap but not ridiculously priced. Still, I passed these up in favor of the always-present ‘bucket-o’-tools’, in which I poked around and came up with an old Stanley #3. This old guy had a large chip missing from one cast wing, the tail tab was broken off, and the 1-3/4″ iron had been replaced long ago with a non-Stanley. Otherwise complete and intact, I bought this little treasure for all of $3.00. 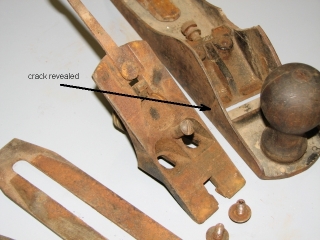 The thing had a lot of grime and surface rust (no pitting that I could find, except for the replacement iron that seemed in bad shape). Once I got it home and was able to disassemble, clean and inspect it I found that the body casting was cracked clear through on the right side, from mouth to top of the wing. Bummer. But repairable. 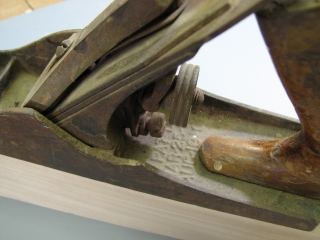 The plane itself is what is known as a “type 9” #3, manufactured between 1902 and 1907 (I refer you to this online reference for identifying Stanley planes: http://www.hyperkitten.com/tools/stanley_bench_plane/ ). The replacement iron — which turned out to be beyond redemption — was a Norvell-Shapleigh “Diamond Edge”, made between 1901 and 1911. I love old stuff.

Most folks by now would have put this plane back out with the trash, I suspect. Certainly it holds no interest or value for the collector, and even for a user it’s a bit of a stretch. But if the crack can be repaired, it’s other shortcomings won’t prevent the plane from being returned to usable condition. So I continue …. 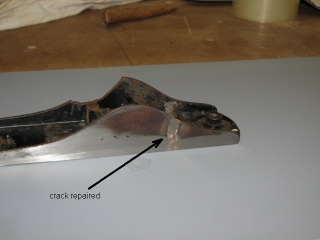 I am not a metal guy but my neighbor, master woodworker and machinist Kim Thoma, is. I did some reading up on welding/brazing cast iron, then took the plane to Kim and asked him what he thought. Literally, in about ten minutes, he had poked through a pile of rod and pulled out his TIG welder, ground the crack into a ‘V’-groove, and welded the thing back together. I still have some grinding to do, and the result will never win any awards for pretty, but the fix is functional. 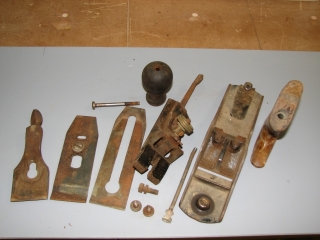 Next up: de-rust and clean all the parts, glue and smooth the rosewood tote and knob and check the fit of the frog. Since the iron is toast I will most likely get a new #3 replacement iron and breaker from Ron Hock (http://www.hocktools.com/). But I’ll report on all that in another post.
This entry was posted in Uncategorized. Bookmark the permalink.