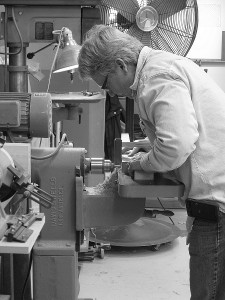 My old Davis & Wells horizontal boring machine is a great platform for making mortices, using machinists’ end mills, and boring holes in doweling and other operations. Knowing that the end mills like a little higher rotation speeds than most drills, I swapped the drive pulley a while back for a larger diameter one that would gear up the motor’s 1725 rpm output to a spindle speed in the 3600 rpm range. This improved the mortising, but my drill bits didn’t like it. 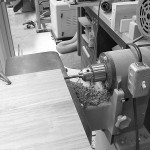 Boring holes on the D&W

I decided to create a best-of-both-worlds solution by converting the machine from single speed to infinitely variable speed, using a 3-phase motor and a VFD (variable frequency drive). 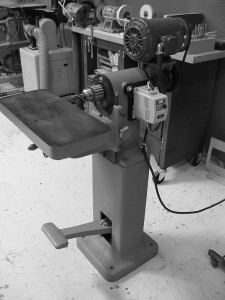 The old D&W with 3-ph motor and VFD

Saving me the trouble of a trip to Apache Reclamation to scrounge for an inexpensive small 3-ph motor, my neighbor produced an old GE 1-HP 3-ph 1725 rpm motor that even had exactly the right mounting foot for the D&W mortiser.  The next step was to pair it with a VFD of the same specifications, and for that I went to Dealers Electric in New Jersey. There I found a Westinghouse-TECO VFD rated for 240v single phase input, three phase 1-hp output, with constant torque output, for about $130. 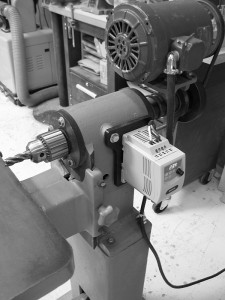 The new VFD in place

Wiring these is pretty easy, and once they are set up you have to go through a series of keypad commands to set the VFD’s parameters to match the motor’s capacities exactly, shaft rotation direction, etc. Once done, you have (in my case) an infinitely variable, 0-3600 rpm speed control at constant torque. 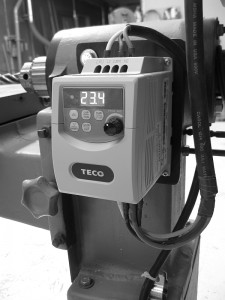 The LED readout on the VFD is in hz rather than rpm, so I have to do a bit of interpolation to hit precise speeds, but ballpark seems to work just fine. If I’m mortising with the end mills, I run in the upper ranges (depending on the diameter of the mill, hardness of the material and general feel of the operation). If boring holes with drill bits I’ll be in the lower ranges, with the same caveats.

I may even get a drill speed chart one of these days! 🙂